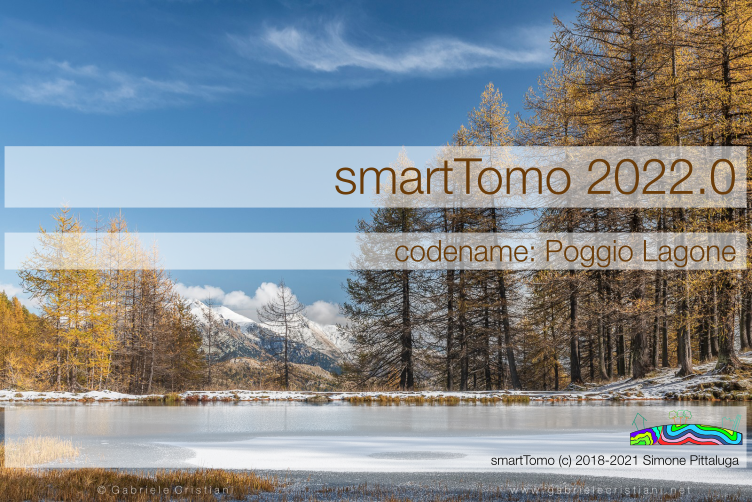 We are happy to announce the release of the new version of SmartTomo, the best version to date.
The new version includes improvements in seismic tomography processing, profile visualization, and new result export options, in addition to the inevitable bugfixes.

A new seismic ray-based smoothing mode has been added. This new smoothing method uses only the velocity value of the cells crossed by the seismic rays. The velocity distribution function follows a law based on the speed of the seismic waves giving more continuity where the speed is higher. This smoothing allows for more velocity variation in the superficial layers and a relatively smoother profile at deeper depths.

The profile visualization module has received several improvements.
It is now possible to assign a title to the profile that will be displayed at the top of the view. In addition to the name, the view type and the RMSE error of the simulation are shown. The title and RMSE error will be saved in the project so that they can be recalled when opening the project again.

The profile can now be displayed also with a grid overlay corresponding to the major intervals shown on the axes.

In SmartTomo 2022 a new way of displaying the results has been added: the information density layer. This layer is intended to represent how much each individual cell was affected during model reconstruction. Higher values correspond to cells whose value has been determined by a larger number of measured data (equations) always taking into account that the tomographic inversion process is an optimization of the model and not an exact solution.
This visualization then allows you to assess whether the tomographic model in a given area has been updated and with how many constraints.

SmartTomo 2022 introduces the possibility to export results in KML format for visualization in external tools such as Google Earth. For the export it is necessary that the seismic profile is georeferenced (first and last geophone) and that the coordinate system EPSG code is defined.

Download demo version
We use cookies on our website to give you the most relevant experience by remembering your preferences and repeat visits. By clicking “Accept All”, you consent to the use of ALL the cookies. However, you may visit "Cookie Settings" to provide a controlled consent.
Cookie SettingsAccept All
Manage consent

This website uses cookies to improve your experience while you navigate through the website. Out of these, the cookies that are categorized as necessary are stored on your browser as they are essential for the working of basic functionalities of the website. We also use third-party cookies that help us analyze and understand how you use this website. These cookies will be stored in your browser only with your consent. You also have the option to opt-out of these cookies. But opting out of some of these cookies may affect your browsing experience.
Necessary Always Enabled
Necessary cookies are absolutely essential for the website to function properly. These cookies ensure basic functionalities and security features of the website, anonymously.
Functional
Functional cookies help to perform certain functionalities like sharing the content of the website on social media platforms, collect feedbacks, and other third-party features.
Performance
Performance cookies are used to understand and analyze the key performance indexes of the website which helps in delivering a better user experience for the visitors.
Analytics
Analytical cookies are used to understand how visitors interact with the website. These cookies help provide information on metrics the number of visitors, bounce rate, traffic source, etc.
Advertisement
Advertisement cookies are used to provide visitors with relevant ads and marketing campaigns. These cookies track visitors across websites and collect information to provide customized ads.
Others
Other uncategorized cookies are those that are being analyzed and have not been classified into a category as yet.
SAVE & ACCEPT